PROGRAMS » About Us » A Tribute to our Co-Founder: Dr. Juan Gómez-Quiñones

A Tribute to our Co-Founder: Dr. Juan Gómez-Quiñones

On Tuesday, November 11, 2020, the City of Los Angeles lost a brilliant scholar, activist and poet with the passing of Dr. Juan Gómez-Quiñones, who was born on January 28, 1940.

The Angeles City Council does hereby resolve that January 28th be recognized as the Day of Professor Juan Gomez-Quinones."

As we reflect on the passing of Dr. Gómez-Quiñones, we recognize that we lost one of the greatest intellectuals of our time. While he was born in Parral, Chihuahua, Mexico, he was raised in Boyle Heights—a place he loved and always returned to in his memory, scholarship, activism and poetry.

Dr. Gómez-Quiñones was educated in Los Angeles, where he received his B.A. (Literature), M.A. (Latin American Studies) and  Ph.D. (History) from UCLA. For almost 50 years, he spent his professional career at UCLA, where he conducted research, taught Chicana/o history, and mentored countless students. His students and mentees later became leaders in the areas of education, politics, art, film, community activism, civic affairs and much more.

He wrote foundational books and articles on Chicana/o history, labor, politics and culture. He helped establish the theoretical foundations of Chicana and Chicano studies. He led, supported and participated in countless political actions for social, economic and racial justice.

Also, he co-founded UCLA’s Chicano Studies Research Center (CSRC) and Aztlán: A Journal of Chicano Studies. Among many awards and recognitions received throughout his career, he was a 1990 Scholar Recipient from the National Association of Chicana and Chicano Studies (NACCS) and earned the 2003  Ann C. Rosenfield Distinguished Community Partnership Prize (UCLA)..

Moreover, he wrote eloquent poetry throughout his lifetime that spoke of love, justice, family and nature, as illustrated in one poem of his 1973 book, 5th and GRANDE VISTA (Poems, 1960-1973):

“My father’s land / is crossed / ribbon like / by stone fences / the wither in the sun. / White stones that glisten in the sun, / Stones that ballast a sea of brown hills. / My father's whip laid them, / My mother’s tribe fed them.”

In all, Dr. Juan Gómez-Quiñones modeled for us—as Angelinos—the necessity of being critical of our past and to work for justice for our communities and for future generations. He dreamed of a world where children and youth walked with pride and dignity based on a strong understanding of their ancestral roots. Dr. Gómez Quiñones motivated us to reimagine our city for the benefit of los de abajo rather than protecting the interests of the powerful and moneyed classes.

[1] Resolution drafted by Dr. Álvaro Huerta. Edited by Dr. Irene Vásquez and Dr. Devra Weber. This resolution or a version of it passed the Los Angeles City Council on January 27, 2018. The author and editors would like to thank  Councilmember Gil Cedillo, Councilmember Kevin de León and Council President Nury Martinez for their support and efforts in approving this historical resolution in honor of a brilliant scholar, activist and poet. 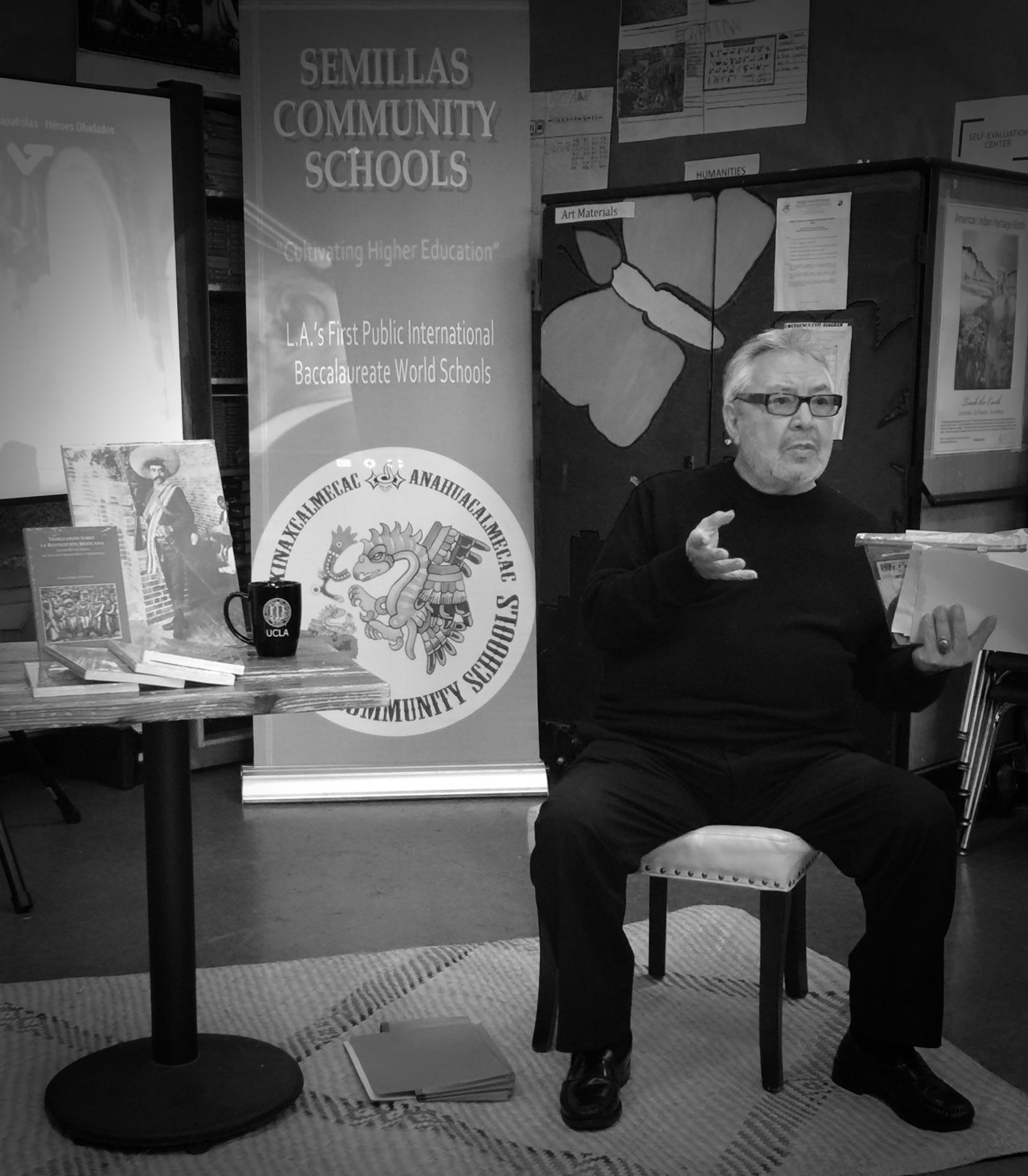 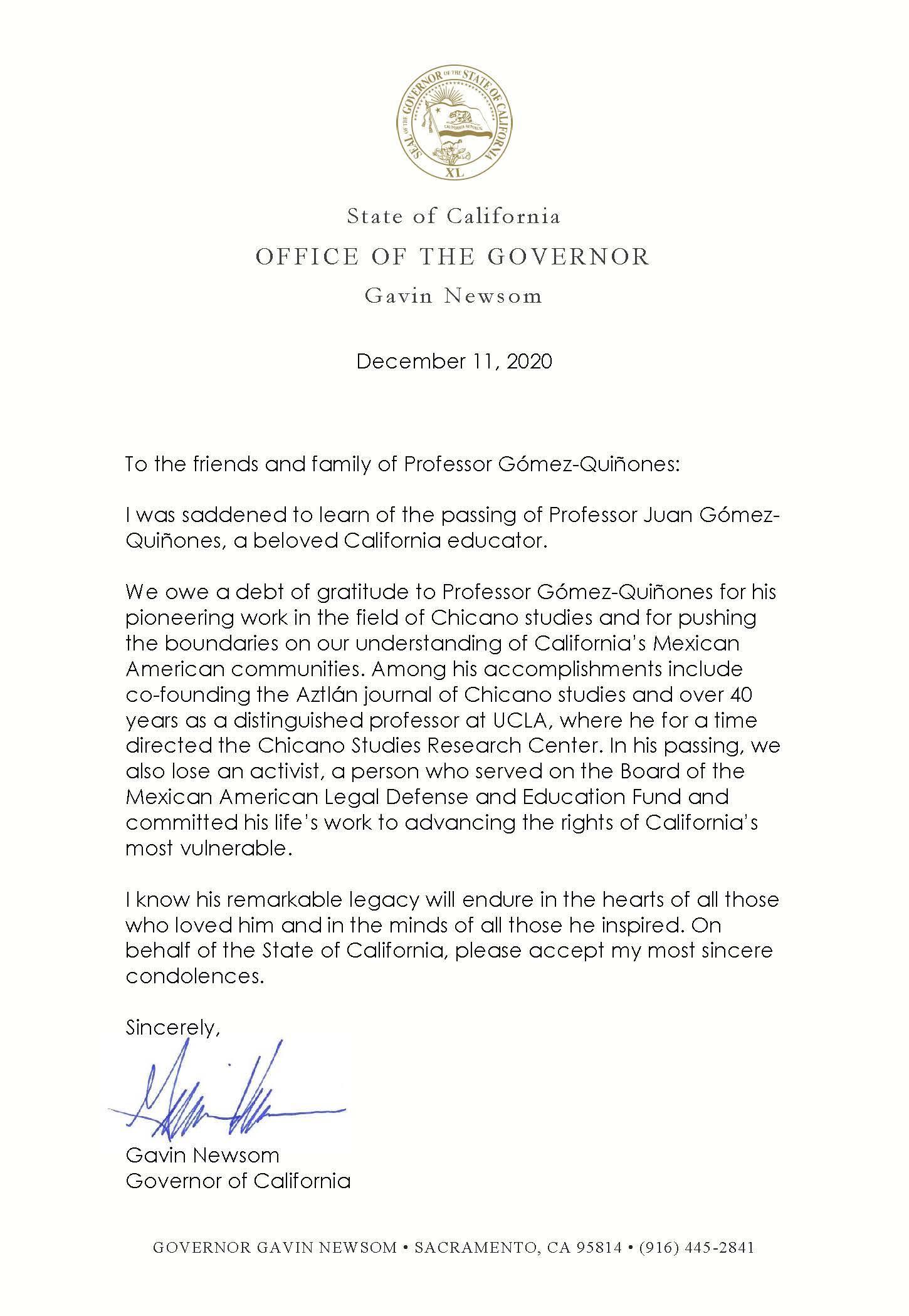 
Professor Gómez-Quiñones specializes in the fields of political, labor, intellectual, and cultural history.  From 1969 to the present he has taught university classes each year and has delivered papers before professional historical societies and other professional venues in the United States and Mexico.  During this time, he has completed multiple research projects, relating to political/labor history,  public policy and culture.


Professor Gómez-Quiñones, born in Parral, Chihuahua, raised in Boyle Heights, East Los Angeles, attended St. Mary’s and Bishop Cantwell M.H. school (Montebello), studied at UCLA, received his B.A. in literature (with J. Espey and H. Meyerhoff), his M.A. in Latin-American Studies (with R. Beals and H. Nicholson) (anthro., hist., & lit.) and the Ph.D. in History (Lat. Am., Europe, & U.S.) at UCLA (with R. Burr, J. Wilkie, S. Payne and E. Anderson).  His dissertation is titled, “Social Change and Intellectual Discontent: Mexican Nationalism, 1890-1911.” As graduate, in 1965, Professor Gómez-Quiñones was editor of the Statistical Abstract of Latin America, 1964 and a teaching fellow at the UCLA history department, in 1965-1966.  During 1966-1968, he was a doctoral Foreign Area Fellow sponsored by the Social Science Research Council and the American Council of Learned Societies, resident in Mexico City and Santa Monica.  He has resided in Los Angeles, Mexico City, San Diego, Austin, Chicago and Albuquerque.  In 1990 Professor Gómez-Quiñones received the Scholar of the Year Award from the National Association of Chicano Studies at Albuquerque, New Mexico.  In 2003 he received the Ann C. Rosenfield Distinguished Community Partnership Prize; and in 2014 received the Bert Corona Community Leadership Award and in 2016, The Baldwin Park Recognition Award.


Among his over 30 published writings are the books or monographs: Mexican American Labor: 1790-1990; The Roots of Chicano Politics: 1600-1940; Chicano Politics 1940-1990; Porfirio Diaz–Los Intellectuales; Sembradores: Ricardo Flores Magon and the PLM; Mexican Students for La Raza, and the essays “On Culture,” “Caso and the Idea of Progress,” “Toward a Perspective on Chicano History,” “Chicano Labor Conflict and Organizing, 1900-1920,” “Mexican Immigration to the United States,” “Critique on the National Question,” “The Relations Between the Mexican Community in the United States and Mexico,” and “Questions Within Women’s Historiography,” and the recent “What Comes Around Goes Around, Political Practice and Cultural Response,” “Outside/Inside, [Immigrant Popular Culture in the Making]”  “The Border as Image (Sp.);” “A Triangular Paradigm on Hybridities”; “Latino-Latino Americans (co-author)”; “A.Caso Las ironias de un modernista”; “Tlecuauhila zupeuth/Guadalupe/Tonantzin”; and “Sin Frontera, Sin Cuartel (PLM, 1900-1930).”  On Indigeneity he has, “Indigenous Quotient and Stalking Words.  He is completing mss, a study on historical arts and culture, “Times and Seasons,” and a collection of essays on ethics and diverse literary and ideological actors, “North and South.”  His current major book publication (2014) (co-author) is on the CCM mobilizations of the 60s and 70s decades, Making Aztlan. He published a project on the theorizing of the Mexican Revolution (TTRM) in Spanish in Mexico, now works on an interpretive book project called “Critical Practice” on the sectarian left of the 1970s/1980s, and most recently coauthored “Las raices anti Mexicanas” (Nexos) on the alt-right, and soon will release “The Realities of Anti Mexicanism” followed by, “An Inquiry, August 29, 1970" as well as a coauthored essay on “Chicano Political Nationalism.”


Since 1969, Professor Gómez-Quiñones has been active in higher education, culture activities promotion and Chicano Studies efforts.  He was awarded a post-doctoral National Endowment for the Humanities fellowship and pursued his research at the University of Texas during 1972-1973 working with Professor Americo Paredes.  As a post-doctoral researcher, he trained in social analysis at the Newberry Library Community History Program, Chicago, 1975.  In 2020, he earned the title of Emeritus Research Professor of History at UCLA.  At one time he served as Director of the Chicano Studies Research Center at UCLA.  Dr. Gómez-Quiñones was the founding senior co-editor of Aztlan, International Journal of Chicano Studies Research.  He developed a proposal and secured funds from FIPSE to organize the “Mexicana/Chicana Women’s History International Symposium, 1982" (S. Monica).  He has also served on UC system and campus committees and is a consistent supporter and contributor to the development of Chicano Studies, including co-founder of two programs, UCLA and CSUSD, co-lead organizer of the CCHE, Santa Barbara Conference (1969) and co-lead editor of the Plan de Santa Barbara, and faculty co-organizer of the Chicano Studies UCLA Mobilization, 1992-1994 (Hunger Strike).  He has served on advisory committees, for The College Board/ETS, and FIPSE, and served as panelist or reviewer for the NEH & NEA, and national foundations.  He is a published poet, 5th and Grande Vista, and several critics have written on his work.


Apart from his academic interest, he is recognized as an able community organizer and planner.  Some of his activities have been civil rights, electoral politics, community education, labor rights, immigrant equities advocacy, legal defense, youth leadership, and cultural programs.  He participated in UMAS-MECHA, The Congress of Mexican-American Unity, EICC, The Urban Coalition, and various community political and publications efforts principally in Los Angeles, also elsewhere as The Chicano Youth Leadership Conference(s) (Denver) and The Poor Peoples March.  For both he served on committees drafting written documents.  From the eighties to nineties he participated as co-organizer of pro-immigrant rights efforts and marches through 1 Stop Immigration Center including co-lead organizer of the 1996 Washington D.C. National Immigrant Rights march for which he wrote the agenda.  Professor Gómez-Quiñones has served as Member Board of Trustees, California State University and Colleges, commissioner, WASC Accrediting Commission for Senior Colleges and Universities and as member of the board of directors of the following civic organizations: MALDEF, The Latino Museum (co-founder), The Mexican Cultural Institute (co-founder), OSIEC (1986-1996), and the El Pueblo de Los Angeles Commission (initial Bd).  He has also participated in several arts, film, and media projects, and in radio and television programs.  He co-organized the multi campus bi-national conference, “Africa’s Legacy in Mexico” (1996).  He is a co-founder board member of Semillas Sociedad Civil - Anahuacalmecac International University Preparatory or North America (LAUSD Charter School, 2001), in the El Sereno barrio of Los Angeles, California.


Professor Gómez-Quiñones has been active in civic and community affairs including after he became a Full Professor and Emeritus Research Professor at UCLA. He remained a steadfast participant and supporter of Semillas Sociedad Civil and the community-based educational activities of Virginia Park in Santa Monica.