The Los Angeles Unified School District (LAUSD) has knowingly violated the obligation to consult with tribes as required by the ESSA Title VI since the law was enacted. This, in the face of the stark reality of neglect, inequity and general dysfunction of the program's management by the District's administration. The net effect of the District's neglect has been a continued decline of the program's effectiveness and continued indicators of educational failure on the part of the District in its charge to protect and advance the interests of Indigenous students.

In the face of the current state of emergency caused by the COVID-19 Pandemic and the outcomes of this crisis, our next steps will be critical in the defense of the educational rights of our students and communities. We must be prepared to advocate for the full and adequate funding necessary to meet all of the needs of Indigenous students tapping into all available funding, including Title VI through a robust consultative process inclusive of all Indigenous Peoples of the Americas, centered upon the rights of the twenty-four tribes or tribal groups recognized by the Los Angeles Native American Indian Commission within the county of Los Angeles.

Recalling that on behalf of the students and community of Semillas/Anahuacalmecac, and acting upon our of grave concern for the neglect of American Indian and Indigenous students enrolled in LAUSD and in LAUSD authorized independent charter schools, our organization engaged with the administration of the LAUSD and its Board of Education since at least 2015 on this matter of the neglect and inadequacy of funding involving Title VII/VI. This has included several attempts to meet with and collaborate with the Title VII/VI program staff over time.

It is important to emphasize also that the LAUSD has had a continuity of high-level administrative oversight over the Title VII/VI program management, namely in the person of Keith Abrahams, Executive Director of Student Integration Services for LAUSD, the office responsible for implementing the District's court-ordered mandates for racial desegregation.

Is it any wonder, well-meaning American Indian parents have distanced themselves from the LAUSD program over the years when the same administrators fail to meet the minimum standards of inclusive program development and implementation year after year?

As partners, Semillas and CNVP have dedicated legal and organizing resources to bring this issue to the forefront collaboratively. In Semillas' analysis, the whole point of the complaint against LAUSD is to strengthen the Title VI program based upon tribal consultation and federally mandated and to expand the available funding by marshaling ALL federal and state funding possible to benefit American Indian and Indigenous students and families currently neglected and ignored by the LAUSD.


Past attempts to raise attention to the needs of American Indian and Indigenous students in the LAUSD have not addressed the true state of the LAUSD's crisis with regards to Indigenous/American Indian students, nor have these addressed the degree to which the authorities charged with complying with federal law have been complicit in knowingly violating their administrative duties to consult, nor the degree to which our organization (Semillas) has raised the level of concern over this matter to all of the entities described above.


We are not confronting the realities of the crisis our students are facing if we simply bury our heads in the hands of the bureaucrats controlling the purse strings of our children's future. We must exercise our agency as students, parents,  community-based Indigenous organizations, Indigenous communities and tribal nations.


Demands are being made NOW for trillions of dollars of expenditures to bail out the rich and corporations of this country. Recently, LAUSD made public its intention to seek millions more in emergency aid to bail itself out of the current crisis even while promising to teach LESS.

Financial plans for the coming fiscal year are in crisis and this will most impact those who have the least. It is critical we aim to advocate for and prioritize the needs of our children and communities.


To be sure, the inclusion of ALL Indigenous students is not an act of symbolic rhetoric nor is it a grab at the limited resources made available to tribally enrolled American Indian students. To the contrary, the call to recognize the human rights of Indigenous Peoples in LAUSD and beyond is aimed at uplifting and centering the needs of the majority of tribally enrolled American Indian students who have for too long been forsaken as a demographically insignificant subgroup, never large enough to fund its own programs.

We have the best minds in Tovaangar, Indian Country, California and the world right here in Los Angeles with which to advance the methodical development of the tribal consultative process concurrently with a community-based demand for adequacy in funding and organization. Among these, is a brief analytical outline created by Anahuacalmecac high school students produced out of their concern for the violations of federal requirements by the LAUSD.  These two concurrent processes or campaigns will be strongest when aligned and leveraged by each other's bases, advances, messages and relations.

A formal complaint to the US Department of Education has been filed by the Indigenous Education Now Coalition, of which our organization is a founding member. At a time when the District and others are seeking waivers for major federal mandates such as IDEA, we will aim to protect the interests of Indigenous/American Indian students in the face of overwhelmingly complicated and diverse demands for resources and attention elsewhere.

Our demand is simple, respect the self-determination of our nations and the dignity of our children and families.


We call on all allies to expeditiously act with truth and conviction. It has been almost two years since Semillas raised the alarm about the District's failures with American Indian consultation and education - almost two years since we publicly decried the District's lack of tribal consultation with regard to its policies, especially its policy on charter schools. Our autonomy as an Indigenous Peoples' community-based school is dependent upon our community's willingness and ability to defend it. So too, must we unite to defend and expand what is possible for all Indigenous youth and children, based upon our peoples' self-determination and human rights.

Not so long ago we united to defend Standing Rock and decried the shameless celebration of genocide through Columbus Day. Today, the children of Water Protectors and Earth Guardians enrolled in Anahuacalemcac and across the LAUSD deserve, at a minimum, an adequately funded education.

2018 - According to the State’s reports on graduation rates for American Indians, LAUSD has a 67.7% Graduation Rate (Classified as RED or LOWEST performance) which is identified as SIGNIFICANTLY DECLINED BY 5.6%.

We are concerned that these results do not indicate our students’ true potential, but more accurately reflect the District’s utter failure to provide access to a free and appropriate public education attentive to the particular needs of this student population.

We call upon the Board of Education review and adopt the United Nations Declaration on the Rights of Indigenous Peoples and the specific measures which address the needs of Indigenous children and families so as to advance towards a more meaningful solution to both the immediate negative impact of existing policies and the historic damages of boarding and other compulsory models of government schooling. 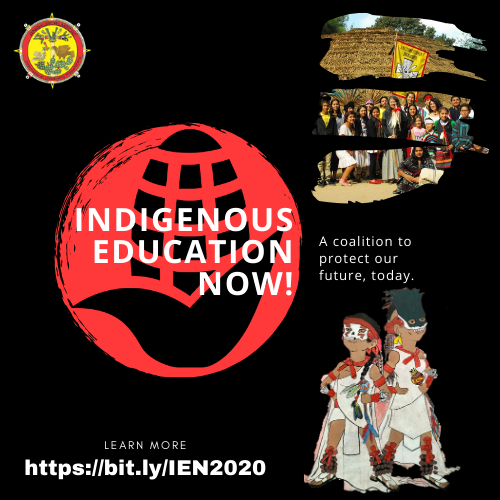 
April 17, 2020 – Today, the Indigenous Education Now Coalition, a network of Indigenous leaders, organizations and tribes have filed a formal complaint with the United States Department of Education against the LAUSD centered around the District’s failure to comply with federal law requiring tribal consultation.  On various levels, the COVID-19 pandemic crisis, is disproportionately impacting Native students in LAUSD given the lack of adequate programming, resources and staffing designed to address the unique needs of Native American students. Additionally, as school, city and state budgets reel from the impacts of the economic recession, the Coalition calls upon U.S. Department of Education to ensure that the LAUSD properly consult with local Indian tribes and organizations to adequately respond to the crisis faced by Indian students.


In response to growing indicators of disparity and inequities faced by Native American, Alaska Native, Native Hawaiian and other Indigenous American students, the Coalition formed over one year ago gravely concerned about the health, well-being and future of Indigenous students and how their lives are impacted by public schools in LAUSD. Recognizing the relationship among poverty, mental health, and educational disadvantages in public schooling, the Coalition centered upon research-based and tribally oriented solutions to the needs of Native American students as codified in law: “toward the goal of ensuring that programs that serve Indian children are of the highest quality and provide for not only the basic elementary and secondary educational needs, but also the unique educational and culturally related academic needs of these children.”


LAUSD is the second largest school district in the entire country, with more than 700,000 students. LAUSD receives hundreds of millions of dollars annually from the federal government for programs, including about one hundred thousand dollars for Title VI funding annually. While we are beginning with LAUSD, we are working to create model policy that can impact all school districts in the State of California.

Who we Are: Indigenous Education Now Coalition