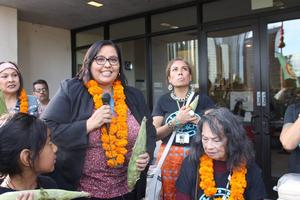 Media coverage must be factual

We are disappointed with the coverage of our struggle by USC Annenberg Media’s platforms. On Nov. 21 the LAUSD made public its board agenda and updated recommendation to renew the charter of AIUPNA.

It is the obligation of the journalist to find the sources. Certainly, at any point before publication, a journalist interested in reporting the truth would have taken five minutes to read the actual board informative which documents the reasons for the recommendation for renewal including academic measures.

Ultimately, the District acknowledged AIUPNA’s academic progress. To be sure, the updated Superintendent’s recommendation to the Board would simply reflect what we had already previously reported to USC Media and made public on our website regarding academic performance.

However, in USC Media’s fever to “tell both sides” they don’t even communicate the facts to begin with.

For example, the article’s headline states, “The LAUSD Board of Education recommended that the school’s charter be denied over low standardized test scores.” The LAUSD Board of Education does not make recommendations on charter petitions, it makes decisions and takes actions - it is the Charter Division and the Superintendent that make recommendations and by the time of the Nov.27th Board meeting, the Superintendent’s recommendation had been made to renew in part BECAUSE of growth on performance in state tests!

As AIUPNA explained to a USC Annenberg Media reporter in person, this is not a “he said, she said” story.

The petition of a community before a government agency ought to be reported as such without inventing simplistic storylines. The importance of real journalism in a democracy is to hold government accountable to the people and to protect our freedom of expression.

Does USC Annenberg Media teach this?

Our charter petition and our existence as a community holds the government accountable to the people as we define our own educational priorities and measures of achievement.

The facts matter, still don’t they?

We call upon USC Annenberg Media to issue a correction to all factually wrong statements in its reporting.