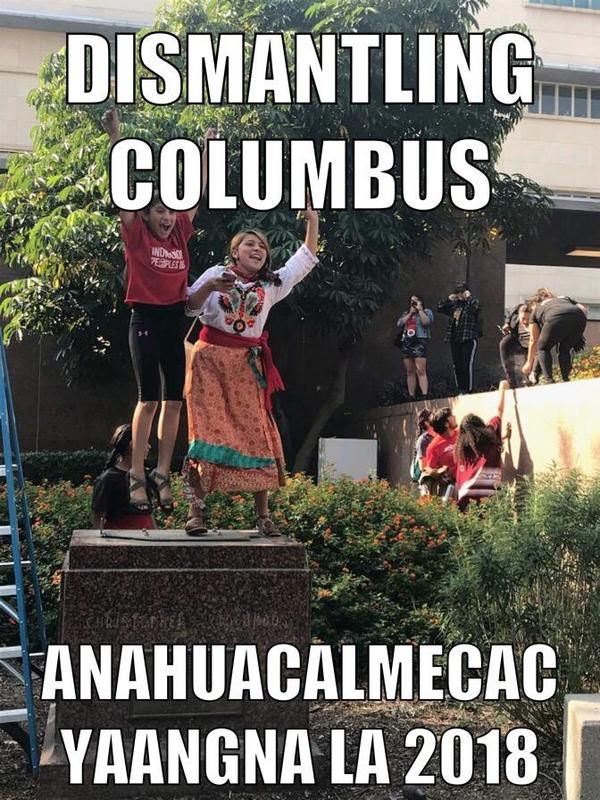 DISMANTLING COLUMBUS IN LOS ANGELES...THANK YOU TO THE MANY ELDERS WHO HAVE RAISED THIS PRAYER AND DEMAND. HONORS TO MANUEL AND VERA YAANA ROCHA ALONG WITH RUDY ORTEGA SR. WHO SINCE 1990 FIRST CALLED FOR THIS ACTION TO TAKE PLACE. WATCH SHORT VIDEO HERE: https://youtu.be/8TjyafBi89E
WATCH: https://youtu.be/8TjyafBi89E
This video is about DISMANTLING COLON - LA 2018 ANAHUACALMECAC WAS THERE EVERY STEP OF THE WAY SINCE 1992... CONTACT: TONY arranaga@lacity.org MICHAEL mkapp@bos.lacounty.gov RELEASE: CREWS REMOVE CHRISTOPHER COLUMBUS STATUE FROM GRAND PARK Bronze statue placed in storage, Native American-led discussion to decide on replacement LOS ANGELES - Dozens of Angelenos gathered Saturday morning to watch crews remove a bronze statue depicting Christopher Columbus, Supervisor Hilda L. Solis, Councilmember Mitch O’Farrell, and the Los Angeles City/County Native American Indian Commission announced today. The historic record is clear that Christopher Columbus did not ‘discover’ America since he never reached the shores of North America and there were millions of Indigenous people already living here. The genocide of indigenous people during the colonization of the Americas lasted centuries. Today, statues of Christopher Columbus are regarded as signs of oppression. The statue that was removed today was located at Grand Park in downtown Los Angeles, next to the Stanley Mosk Courthouse off Hill Street, and close to the steps of the Los Angeles County Hall of Administration. “The statue of Christopher Columbus rewrites a stained chapter of history that romanticizes expansions of European empires and exploitations of natural resources and of human beings,” said Supervisor Solis, who authored the motion at the County Board of Supervisors to replace Columbus Day with Indigenous Peoples Day. “We have all inherited this complex, difficult history. Minimizing – or worse, ignoring – the pain of Los Angeles’ original inhabitants is a disservice to the truth. The removal of the Columbus statue in Grand Park is an act of restorative justice that honors and embraces the resilient spirit of our County’s original inhabitants. With its removal, we begin a new chapter of our history where we learn from past mistakes so we are no longer doomed to repeat them.” "This is a natural next step in the progression to eliminate the false narrative that Christopher Columbus discovered America," said Councilmember O'Farrell, a member of the Wyandotte Nation, who worked with Supervisor Solis on the removal of the statue. “Columbus himself was personally responsible for committing atrocities and his actions set in motion the greatest genocide in recorded history. His image should not be celebrated anywhere.” Councilmember O’Farrell, along with Supervisor Solis and the Los Angeles City-County Native American Indian Commission, have been working together, in collaboration with the Native American community, to remove the monument from the Los Angeles County Civic Art Collection and Grand Park LA where the statue had sat. Recently, the Los Angeles County Arts Commission voted to approve the statue’s relocation to a County storage facility. “It’s important that we use this moment to recognize and acknowledge the Yaavitam, the first people of this ancestral and unceded territory of Yaangna that we now know as downtown Los Angeles; we honor their elders, past and present, and the Yaavitam descendants who are part of the Gabrieleño Tongva and the Fernandeño Tataviam Nations,” said Rudy Ortega, Chair of the Los Angeles City/County Native American Indian Commission and Chair of the Fernandeño Tataviam Nation. “This is an action that is long overdue. Los Angeles is home to the largest Indigenous community in the country,” said Chrissie Castro, Vice Chair of the Los Angeles City/County Native American Indian Commission. “Our people have been protesting this statue, and all that it represents for decades. This is a victory for not only Indigenous peoples – but all Angelenos that care about truth, dignity and justice.” The move comes on the heels of the inaugural Indigenous Peoples Day celebration in the City and County of Los Angeles, the largest municipalities to officially modify its administrative code and replace Columbus Day with Indigenous Peoples Day as an official holiday. Los Angeles has the largest urban Indigenous population in the entire country. The Los Angeles City/County Native American Indian Commission, the Los Angeles County Arts Commission and the Los Angeles County Commission on Human Relations are spearheading a process to permanently relocate the statue in compliance with the LA County Civic Art policy and procedures. Supervisor Solis and Councilmember O'Farrell support the Los Angeles City/County Native American Indian Commission’s request for an open and transparent process on what will replace the statue at the site in Grand Park LA, and to lift up Los Angeles’ original inhabitants and contributions, in compliance with LA County Civic Art policy and procedures. #VeraYaanaRocha ###
https://youtu.be/8TjyafBi89E
https://youtu.be/8TjyafBi89E Source: Dismantling Colon in Yangna LA 2018