A Diverse Coalition of L.A.'s Communities Calls for Access to Fresh, Culturally Relevant Food Beyond the Pandemic 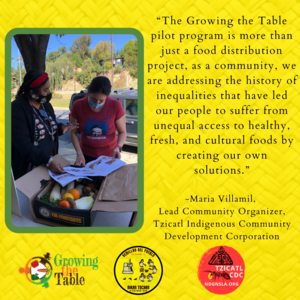 A group of L.A. organizations has delivered more than 60,000 pounds of culturally relevant produce to under-resourced communities in an effort to grow the table as big and diverse as L.A. County


“Food insecurity is tied to long-standing discriminatory practices and will not simply go away after the pandemic unless we enact systemic change,” said Kat Taylor, Philanthropist and Founder of Growing the Table. “By addressing racial, gender, economic inequalities that drive hunger, Growing the Table works with diverse, local community partners who can fill in the gaps that are not addressed by traditional outlets.”


“Inter-ethnic coalition building is vital for collective truth gathering and collective truth telling,” said Susan Park, Founder of Asian Americans for Housing. “When low-income people of color sit at the same table we see different faces and hear different voices who care about us all. We don’t buy into scarcity myths. We know that there is enough for us all. We can grow a table as big and diverse as L.A. County.”


In the wake of the pandemic shutdown, food insecurity has become one of the most pressing issues affecting L.A. family health and safety, especially for communities without the resources to overcome multiple barriers to reliably accessing nutritious, culturally relevant food (i.e., food deserts, overwhelmed food banks, discriminatory lending, lack of access to capital). One in four people in L.A. County often do not know where their next meal will come from, with under-resourced residents and communities of color having experienced food security over twice the rates of white residents.


Since the pilot began on January 20, 2021, the coalition has served those whose needs have been historically been unmet, such as low-income, older and super senior (75 and over) Black residents in South L.A., migrant and Native Indigenous communities in the San Gabriel Valley, and NHPIs in the South Bay (Lennox, Hawthorne, Lawndale, Inglewood, Carson and Long Beach). Recipients have expressed support for sustained access to healthy, organic and diverse food boxes - especially after the pandemic. In response, the coalition has delivered 60,000 pounds of produce, including culturally relevant specialties like Fijian taro roots and leaves, mangos, coconut milk, nopales, kale, napa cabbage, and daikon radish.


“Food reflects our cultural identities,” said Heng Lam Foong, Program Director at API Forward. “What we eat, how we prepare food is connected to family, to tradition, and a long held practice of preparing healthy, unprocessed foods that nourish and strengthen communities especially during such stressful times.”


The coalition’s partnerships among diverse farmers and communities in L.A. are the building blocks for a more autonomous and resilient food system. And as we strive to grow back stronger from the pandemic, food security will play an even greater role in contributing to family health, and nurturing community safety and stability.


“The Growing the Table pilot is more than just a food distribution project,” said Maria Villamil, Lead Community Organizer, Tzicatl Indigenous Community Development Corporation, which works closely with Semillas Sociedad Civil. “As a community, we are addressing the history of inequalities that have led our people to suffer from unequal access to healthy, fresh, and cultural foods by creating our own solutions.”


Earlier this year, Growing the Table partnered with The FruitGuys to pack 2,790 boxes of  fruits and vegetables from 15 Black, Indigenous, Brown, LGBTQ++ or women-owned farms.


“As a 23-year-old, family business and B-corp, we are deeply honored to be invited to work with this broad coalition of diverse community leaders,” said Chris Mittelstaedt, Founder and CEO of The FruitGuys. “We are excited to continue this work and find ways to bring awareness to the small and diverse farmers that we support."


Growing the Table was founded in 2020 by philanthropist and TomKat Ranch Education Foundation Co-Founder Kat Taylor during a time of widespread supply chain disruptions. The initiative was created to help increase purchasing from small, Black, Indigenous and Brown, LGBTQ+, women-owned, and regenerative farming practitioners and increase access to food for isolated, low-income Black, Indigenous and Brown communities throughout California.


“There is always more room to grow a table as big and diverse as LA County.” - Susan Park, Asian Americans for Housing


The public can help support local farmers of color and address food insecurity by making a donation to Growing the Table, and our coalition partners.